Lookee what I got!

DH and I went to the Omaha Orchid show today at the Lauritzen Gardens.  There were tons of lovely orchids there and I could have easily spent hundreds, I sort of regretted telling my DH that I was only going to bring home two orchids.  I was good, I did only bring home two orchids, but I did get a butterwort, however since it isn't an orchid I did keep my word.  :)

I got this one which is a mini Phalaenopsis and is cute as a button.

And here is the cute as a button, not to mention easy to spell, butterwort.

I was very intrigued by this little guy.  It eats bugs and since my dogs like to take their own sweet time coming in from outside we tend to get a lot of bugs when it is warm out.  Hopefully this will help keep them down.  :)

Wish me luck keeping these guys alive.  I've been able to keep orchids alive for about a year but after that they die.  For some reason I never thought to feed them so I will be rectifying that this time around and getting them a good quality orchid food.  We shall see what happens.  I LOVE orchids so if these guys do well and are still thriving by the time the 2015 Orchid show rolls around I can see them being joined by more of their orchid friends.

While you are reading this blog, don't forget to read and follow my other blog This Area is Full of Scarf.  For every 10 followers I get I will host a fiber give away.
Posted by hlynn at 3:49 PM No comments:

I have decided to start a blog for just my knitting, dyeing, and other fiber related pursuits.  Come see it here - This Area is Full of Scarf.

I promise to update it frequently and I will also do a better job of updating this one :)
Posted by hlynn at 2:14 PM No comments:

It's been a project but my yarn website T&H Fiber Works is now live.  Here you can find my hand dyed yarn and roving, hand made stitch markers, and very soon hand made buttons and shawl pins.

I offer yarn and roving by the single skein or braid as well as yarn and roving clubs where you can buy 3 or 6 month memberships and get a skein a month at a reduced price. Be sure to check it out!

Here's a little eye candy for all of you.

Emerald Isle
Posted by hlynn at 1:27 PM No comments:

My husband and I are now in Dubuque, we have been for about two weeks.  It's been a busy time around here getting moved and unpacked.  Of course my fibro chose now to flare as well so unpacking hasn't been as quick as I would like.

Anyway, we are getting settled gradually.  We have a lot we want to do to the house so that will also slow unpacking as we don't want to unpack some items before the area we are going to put them gets finished.  Pictures of our efforts will be forthcoming as soon as I find where I put the camera cord.  :)  It's in a box somewhere.

Yesterday we had our first of 5 classes for the Distinctively Dubuque program.  It's a program offered by the city of Dubuque to help people new to the area to figure out points of interest in the city, how to get involved in various organizations, how to find various services we might need, and various other things you might want to know about a new city.  It was highly recommended by the HR at my husbands new job and we thought it sounded like fun so we signed up.  I am really glad we did.

There were about 35 in our class.  We had dinner, we were welcomed to the city by the Mayor Pro tem, and had a trolley ride around the downtown area up to the Eagle Point Park area to get a bit of a taste of what is out here.  The trolley ride was quite a bit of fun.  We learned about some interesting things from a local, saw some interesting architecture, almost got hit by a train, got to see the view of the river from Eagle Point Park, and learned about an art show that one of the people in the class was a part of.

Almost got hit by a train?  Did you read that right?  Yes you did!  However, that is an exaggeration, we were never in any real danger.  It was more funny than anything.  We were coming to a train crossing and were probably 10 feet from it when the lights went on.  It was one of those situations where most people would just continue on, but our driver hesitated and stopped.  He stopped with the front wheels on the tracks as the cross arms were coming down so the arm hit the top of the trolley.  He backed up off the tracks, the arm came down, and a bit after that the train came thru.  We gave him a little bit of a teasing and it will probably be a running joke thru the rest of the classes.  Had he not hesitated we would have been across the track way before the cross arms came down.  However he did hesitate so it turned into a funny experience.

After the trolley ride we went back to the meeting room where we first gathered and had a talk by a local architect who is on the historical preservation society.  It was really interesting and cool to see the pictures of some of the old buildings before and after their renovations.  One thing that struck me as very interesting/funny was the story of Cooper Wagon Works.  Legend has it that the owner was approached by both Ford and Studebaker to build cars for them.  He turned them down because he thought automobiles were just a fad.  The business eventually closed because of the auto industry and now in an ironic twist the site of Cooper's home is a parking garage.

All in all, it was a very enjoyable evening.  Next week we are meeting at the ice center at the Mystique Casino.  I hope we don't have to ice skate, if we do though, I will be sure to show you pictures of my bruises.  :)
Posted by hlynn at 1:18 PM 2 comments:

We are still working on moving.  Fortunately the bank says we should be able to close on the new house by the end of the month.  Yeah!!!!  We still haven't sold our house yet though.  Hopefully it will sell soon.  I would really like this whole thing to be done with.

In the meantime, a friend of mine shared this video with me and I really like it so I wanted to share it with you.

I love Cephalopods, they are so cool.

I am still working on selling my house.  So far, the St. Joseph statue in my front yard hasn't done me any good.  However, I am still hopeful the house will sell soon.

In the meantime, when we have showings of our house we vacate and take the dog with us.  We don't want to leave the dog alone in the car in this heat so we have been heading to the local dog park almost every time so he can run around while we stroll along behind him.

Watching him run around sniffing, doing his business, and playing has made me come to think of the dog park as Facebook for dogs.  When Spike checks out the scent of the other dogs he is checking his friend's status messages.  When Spike pees or poops he is leaving a status update of his own.  The trash cans for the poop bags are like the newsfeed where you can see lots of status updates all at once.  There is agility equipment for him to play on and other dogs to play with so there are the time wasting games that Facebook is known for.  And of course, there are lots of bugs, both Facebook and the dog park have bugs to annoy you frequently.

Maybe I've put to much thought into this, but considering all the time I personally waste on Facebook that really shouldn't surprise anyone.  Ah well, at least when Spike checks his 'facebook' I get some exercise so it can't be all that bad.  :)
Posted by hlynn at 11:33 PM No comments:

My husband and I are in the process of selling our house so we can move to Dubuque, IA where he has just started a new job.  As part of the process all of my friends are giving me tips and hints on how to make my house sell better, such as baking bread for a showing, running lemons thru the disposal to make the kitchen smell good, etc...

One of my friends who used to be a realtor told me to bury a St. Joseph statue in front of my house.  I'm really hating the whole 'living in a museum' thing so decided I'm willing to try anything.  I went to the store today to look for a St. Joseph statue.

I asked the woman at the counter if they had any and she handed me a 'St. Joseph Home Sellers Kit'.  When I got the box from the clerk I cracked up.  I never expected to buy a 'saint in a box' and the whole idea is vastly amusing to me.

Here is the box I got. 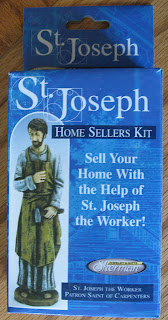 And here is what was in it. 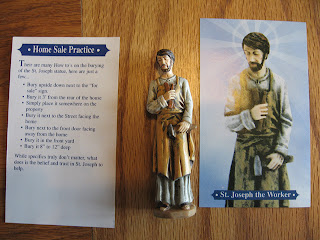 If you google St. Joseph you'll find hundreds of directions of how to and where to position the statue in your yard.  If I wanted to follow all of them I would have to dig up my entire lawn to have a statue every where the directions say.  So I am just going to follow the directions of my friend who told me about the legend and plant it upside down, facing my house, in the front yard.  I've also promised the statue a spot in my new home if he helps me sell my house.  (According to all of the directions you have to dig up the statue or the property will continue changing hands.)
I haven't buried him yet but a couple hours after I got home from my shopping trip my realtor called and we have a showing for tomorrow morning.  So, St. Joseph or just coincidental timing?  I'm not sure it really matters, but right now, I have a statue to plant.
Posted by hlynn at 5:01 PM 2 comments:

Shopping and other fav links